Chevron or Herringbone - What is the difference? 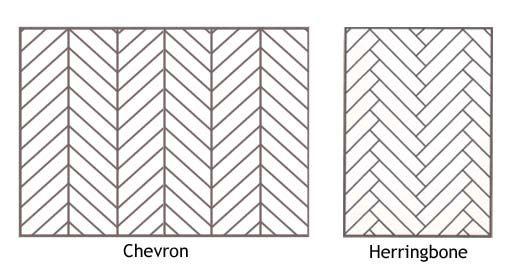 Chevron or Herringbone - What is the difference?

Parquet floors come in a variety of shapes and sizes including, Chevron & Herringbone, Traditionally Herringbone was the preffered laying of a parquet floor but now we new design trends Chevron Parquet Flooring is becoming the next big trend with interior designers and homeowners all opting for this new and exciting floor. Chevron and Herringbone Flooring, what is the difference? We're glad you asked!

As with any parquet flooring, Chevron designs are installed in a zigzag pattern that come to a point one in the front and one at the back on the next row and so on. The tell tale sign of a Chevron flooring is the 'V' shape in the design this is your first indication that it is indeed a Chevron Patterened floor, The next is that the board are installed together at an angle so each chevron plank we have no right angled edge, all of the chevron boards will be cut on a 45 degree angle. Chevron Parquet was first noted it history around the 16th Century with the name, Point De Hongrie which is a pattern of embroidery where the chevron design and style comes from. The name comes from St. Elisabeth of Hungary as it is thought it was named after her. The Chevron pattern took off in 19th century Paris, where most new builds featured Chevron and Herringbone patterned floorings. Chevron floors now come in a variety of types of flooring, designs and finishes. These new Chevron floors are now available in real wood, Chevron engineered flooring and hard wearing Chevron laminate floors.

The first thing we look for when indentifiey a herringbone floor is that the planks are install at right angles to each other, all of the boards will be perfect right rectangles with no sloping angles. The second thing to look for is the staggered zigzag pattern, this creates the effect that the boards follow on from one another, after another. Parquet Herringbone floors have stories to tell, dating back to the 1600s where the rich and powerfull had parquet floors installed through out their manor homes and now with new technologies, manufacturers are turning this herringbone parquet in to a head turner with new colours and fresh designs. Herringbone floors now come in a variety of types of flooring, designs and finishes. These new Herringbone floors are now available in real wood, Herringbone engineered flooring and hard wearing Herringbone laminate floors.

Chevron and Herringbone parquet floors both have so much to offer your home, they can turn your space in to a traditional cottage, a modern studio apartment or a country manor. Chevron & Herringbone flooring have many different manufacturers and therfore come in a multitude of qualities, colours, textures, designs and finishes. For more information call us on 01283 547528